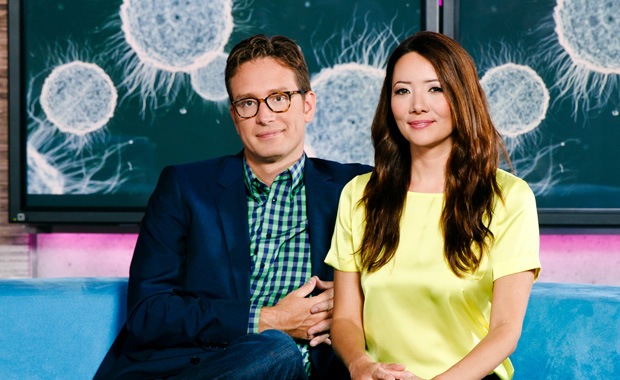 Fueling passion in STEM is about more than a career; it’s about making an impact.

Mediaplanet What was the “a-ha” moment that sparked your passion for the sciences?

Ziya Tong I grew up watching nature and wildlife documentaries. In fact, back in the days of Melrose Place, my friends knew that if they were coming over to my house, they were in for an evening of wine, cheese, and Ploughshare tortoise mating videos.  So when I finally had the chance to travel to Africa — surrounded by wild animals on their own turf — I was hooked!  From that point on, I knew that I wanted to share the wonderful and exotic adventures of scientists in the field, with people watching at home.

Dan Riskin I read a book in high school called Just Bats by M. Brock Fenton. Instead of talking (only) about ecological niches and trophic levels and all that, the book had a lot of really funny stuff in it, too. Stories about grad students falling into mud puddles, or getting chased by lions. What I remember most though, are descriptions of the genitals of pallid bats, and the mating habits of little brown bats that had me blushing in the back of the classroom. The way the book was written made me into a big fan of bats. Later, I did my master’s degree with Dr. Fenton. It wasn’t long before I was the one falling into mud puddles, taking measurements of bat genitals.

MP What is the best part about being able to interact with young science enthusiasts on a daily basis?

ZT  It is truly the ability to share that sense of wonder and awe. For me, scientists are in essence, “reality testers”. They get to ask questions like, “this stuff of material reality, is it real?” It’s almost Matrix-like in the sense that the world around us — whether it’s at the buzzing, vibrating particle level, or the vast, cosmic, inter-planetary level — cannot be witnessed by our human senses alone. There are days when I’m wowed by the ancient chemistry of a glass of water that’s billions of years old, or marveling at the fact that there are tiny mites having sex my face. You can’t see these things with the naked eye, but we know they’re tried, tested, and true through science.  What I love sharing with young audiences is the simple fact that the ordinary world is extraordinary.

DR Daily Planet is enjoyed by people from a broad range of backgrounds and ages, but whenever I look down the barrel of that camera, I’m thinking about the high-school aged kids who are just discovering science. That’s what gets me out of bed in the morning. Getting kids excited about science is important to me for two reasons. First, it turns some kids into scientists and engineers, people who can solve some of the environmental and economic crises the world will face in the coming decades. Second, any kid who watches our show, regardless of career trajectory, will walk away with an appreciation for the beauty and fun of STEM. They’ll become voters who want their tax dollars spent on science and technology. They’ll become champions of science. Canada and the world need more people like that.

“The reason I love sharing the wonders of the world on Daily Planet with our viewers, is that I believe when you fall in love with the world, you will fight to protect it.”

Daily Planet has been a Canadian institution for over 15 years — how has the show continued to stay on the cutting edge?

ZT I’d say it’s right in the name of the show: Daily Planet. Every single day there are brilliant new discoveries somewhere on our planet, and our producers are so streamlined at what they do, that we can source out a science story for you in the morning, say from Tasmania, and get it to you that night by 7pm. We truly have a stellar team.

DR I’ve been with the team since 2011, and I can say that since then our focus has been on using story to make science and tech exciting — plain and simple. It’s all about great characters with great stories.

MP What is your advice to readers who are eager to begin a career in a STEM field?

ZT My advice is to find a mentor. My undergraduate degree was in Forensics, and I worked in a lab that focused on neuroscience. Starting out as a research assistant, I got a chance to see what my long-range career possibilities were at a very young age. I could look around and see what all the various graduate students were up to, those who had left academia to pursue professional careers, and to get a glimpse of what it might be like to be a tenure track professor. The world opens up that way; you get a hands-on opportunity, and a strong pivot point to see what your possibilities are.

DR Follow whatever questions you find most interesting. No one can tell you what you find interesting. That’s the beauty of STEM. If you’re bored, you’re doing it wrong.

MP How can parents make science, technology, engineering, and mathematical lessons practical and fun for their children?

ZT It’s really by taking STEM topics, and instead of making them abstract, making them relatable. I’ve hosted the Engineers Canada awards for the last few years, and the inside joke is that most people have no clue what engineers do! But if you want to know who’s building the submarine cables that connect our internet, or fabricating skin substitutes for grafts used in tissue engineering, or lighting up your mega-stadium rock concerts, those are engineers! So it’s finding a child’s interests first, and then showing them the surprising ways that STEM builds that backbone.  Overall though: the best thing you can do is share your joy for learning.

DR Science isn’t about knowing the answer. It’s about working on a hard question. So lead by example. You can help your kids with their science homework, but that’s just a review for you. It’s far more valuable to show them that you’re learning things too. If you expect your kids to put the effort into learning a whole new branch of science, why not show them you’re willing to do the same? Buy a book about prions, or about math. If that prospect scares you, you’re experiencing what your kids are going through. I try to always be working on a book outside my comfort zone, just to remind myself what science is really all about.

MP How important is increasing STEM awareness to the future of Canadian innovation?

ZT I’m a big believer in the polymath approach when it comes to education. In fact, a survey of Nobel laureates found that prizewinners in the sciences were significantly more likely to also have training in the arts. So it’s important to have a balance of both. STEM is terrific at answering “how” questions, and the arts are very adept at asking “why”. Growing up in the 21st century, and with the challenges ahead, I believe both are invaluable. That said, we live in a time where STEM knowledge is vital. With rapid species decline and palpable climate change at our door, we need passionate young people who can re-shape our modern global systems with science, technology, engineering, and math. The reason I love sharing the wonders of the world on Daily Planet with our viewers, is that I believe when you fall in love with the world, you will fight to protect it.

DR It’s a unique time right now, where public support of science (STEM) in Canada is actually more important than the science itself. All of your readers know we’re up against some pretty scary global issues right now — droughts in California, changing hurricane/typhoon patterns, global spread of diseases like Ebola, SARS, and the bird flu. The solutions to those problems will come from STEM. Whether or not Canada plays a leading role in solving them, as we have historically, all comes down to the state of science and tech in this country. The Harper government has gouged funding to the sciences, and actively prevents Canadian scientists from talking to Canadians about their research. More than 800 foreign scientists have just signed an open letter asking out government to let Canada’s scientists back into the fray where they can contribute. It’s as bad as its ever been in Canada — worse even than the U.S. under Bush. Scientists in Canada can’t do their jobs properly right now. Canadians need to show their support for STEM so that Canada can get back to work leading our planet into the future. Public support of STEM is vital.