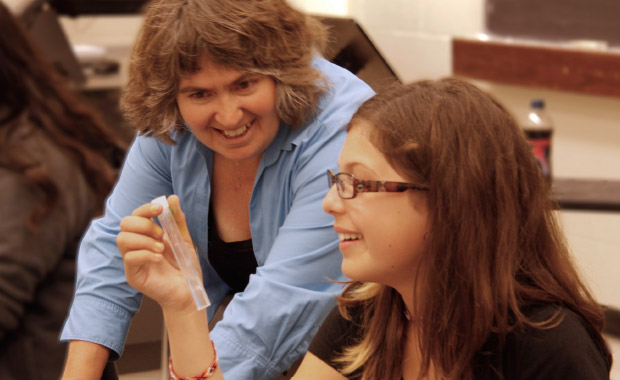 Women have made progress in science, technology, engineering and math, yet movement into male-dominated STEM industries has slowed down considerably in the last 20 years.

Less than one-quarter of Canadian women work in the sciences,  a number mirrored in the United States, where 26 percent of women had STEM careers in 2011. While up from seven percent in 1970, that’s only a three percent increase since 1990.

Change needed at the classroom level

For those statistics to improve, change needs to start in the classroom. Bjarnason believes that engaging girls in science by Grade 5 or 6 — before they shut their minds to STEM subjects — is key.  In an unpublished paper on STEM gender gaps and bias in education, Bjarnason cites a study in which girls reported more confidence in their ability to tackle science and math after participating in an electrical engineering project geared to Grade 5 students in Calgary.

Bjarnason also says that “putting STEM women in the classroom is huge,” and is one way schools can inspire girls to enter the field. Other approaches include letting girls participate in hands-on science projects without boys being around, and encouraging girls to attend extracurricular events like AWSN’s Operation Minerva, which pairs up Grade 8 girls with successful STEM women.

In fact, the Career Choices and Influencers in Science,  Technology, Engineering and Math report, released in January, states that girls are almost three times more likely to consider STEM careers if they participate in outside events such as  science fairs.  The report stresses the importance of engaging girls in “highly active STEM activities.”

Bjarnason also thinks more females would enter science if its human and creative sides were emphasized. “If girls could understand that there’s a creative component behind science and there’s a helping component behind science, you may captivate them earlier and keep them,” she says. “I don’t think we do a very good job of teaching women what the possibilities are in STEM.”

Programs exist both nationally and provincially to encourage females to enter STEM careers, like Intimitrons from Area 51, an all-girl robotics team in Calgary. As well, the AWSN offers a scholarship to third-year female undergrads to encourage them to stick to their studies. Bjarnason says women often drop out in year three because they fear not getting high marks or feel that “dealing with small amounts of gender bias or sexism is not worth it.”

The Canadian Engineering Memorial Foundation (CEMF) also provides scholarships to women on the condition that they act as ambassadors, making presentations in high schools to encourage girls to take up engineering, says Cheryl Sandercock,  Petroleum Engineer and a CEMF Director.

Getting girls to enter STEM is one issue; having them stay in the field is another.  As Sandercock points out, women engineers may work in male-dominated companies or be treated differently than men in the same jobs. To help reduce the flow of women out of STEM and to support those who stay but are “stymied at the junior level,” the WinSETT Centre — a project of the Canadian Coalition of Women in Engineering, Science, Trades and Technology (CCWESTT) — has set up leadership training for women. In addition, the Women Workplace Improvement Network (WWIN), run by the AWSN, works to promote the retention of women in STEM, and Geo Women of Calgary supports women geologists working in the field, through peer mentoring and professional programs.